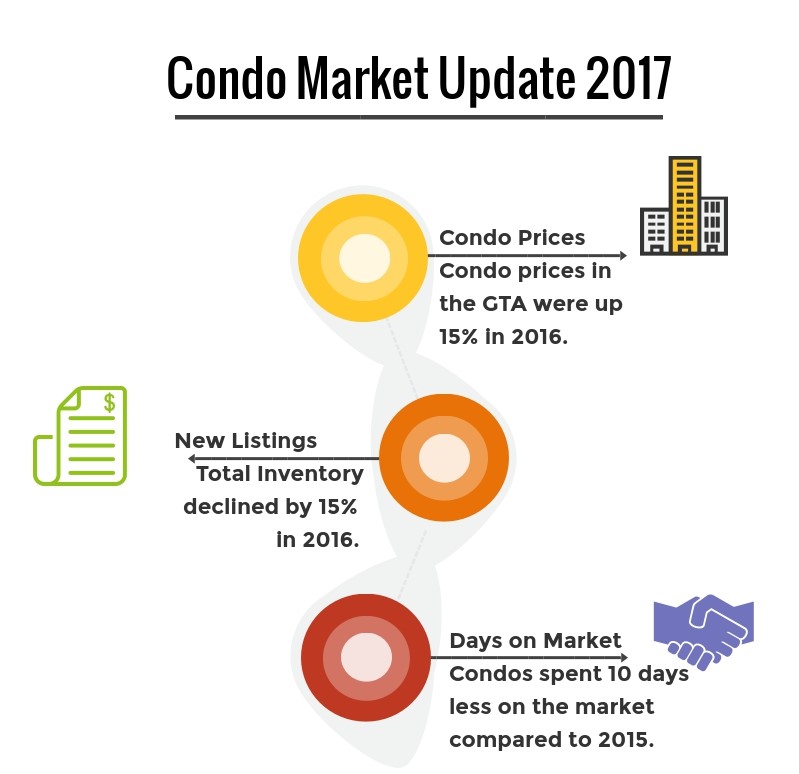 2016 brought some of the most dramatic increases in home ownership costs in recent history. The fourth quarter of 2016 in particular saw an increase in condo sales by 22.3% and a decrease in new listings by 13.4% compared to last year.

What this means is that despite the increase in sales over last year, supply remains constrained by the almost 15% reduction in condo listings. Pre-construction developers can barely keep up with the demand as most projects with occupancy dates in 2017 and 2018 are already sold out.

Less time on the Market

Condos are the Future

With no sign of prices slowing down, condos have become an attractive option for first time home buyers, many of which can no longer afford single family low-rise homes. While detached and semi-detached homes saw the highest price increases, condos saw a more controlled growth at a modest 15%.

Forecasts have marked 2017 as a year of similar growth, with expected condo price increases of 10-12%.

Rentals are the Future of Condo Investment

Competition between renters increase in 2016. The number of condos listed for rent  was down almost 15%. Average days on market

The number of condominium apartments listed for rent in the fourth quarter of 2016 was down substantially (-14.2 per cent) compared to Q4 2015. This lack of inventory was at the root of the dip on rental transactions (-5.8 per cent).

Given these trends, many buyers are now purchasing condos with the intent to rent them out as a short term investment, and then sell them down the line in a couple of years.

The bottom Line and forecast for 2017

If you take away anything from this article it should be the following:

We hope you found this assessment both honest and informative. Please be sure to follow us on Facebook and Instagram for up to date Condo information around the GTA.